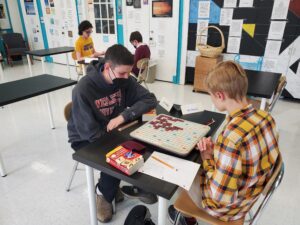 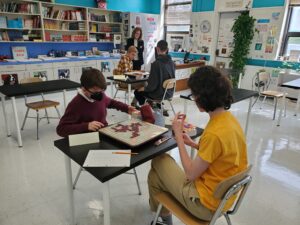 The Fourth Annual ECDS High School Scrabble Tournament featured nine eager players competing for the top prizes of Amazon gift cards. Equally important to those nine competitors was the opportunity to demonstrate their acumen in the offense and defense of the venerated game. Competitors “played” the room with the top four scores going on to the finals. The highest score in the Open Round was 398!  Zach Bittker became the 2022 Champion with the highest score in the finals, 344, and Eric Gordonos finished as the runner-up with 297. Ms. Holtz, ECDS high school English teacher, sponsored and officiated the annual event.

Note to Parents: weather or emergency delays and closings are always announced by direct email, on TV 3, 8, & 12 and radio stations WICC 660 AM, WEBE 108 FM, & STAR 99.9 FM, as well as on the school closing list of CTWeather.com.

There are no upcoming events.